Here’s another Obamacare error message you should know about. A few hours after we highlighted her broken promise on Obamacare, Allyson Schwartz removed the page from her official site that told people they could keep their existing health care plans. If you visit http://schwartz.house.gov/issue/affordable-care-act-update, you’ll now see “Page Not Found.” We’re curious if she enlisted Obama’s web team to make the update… 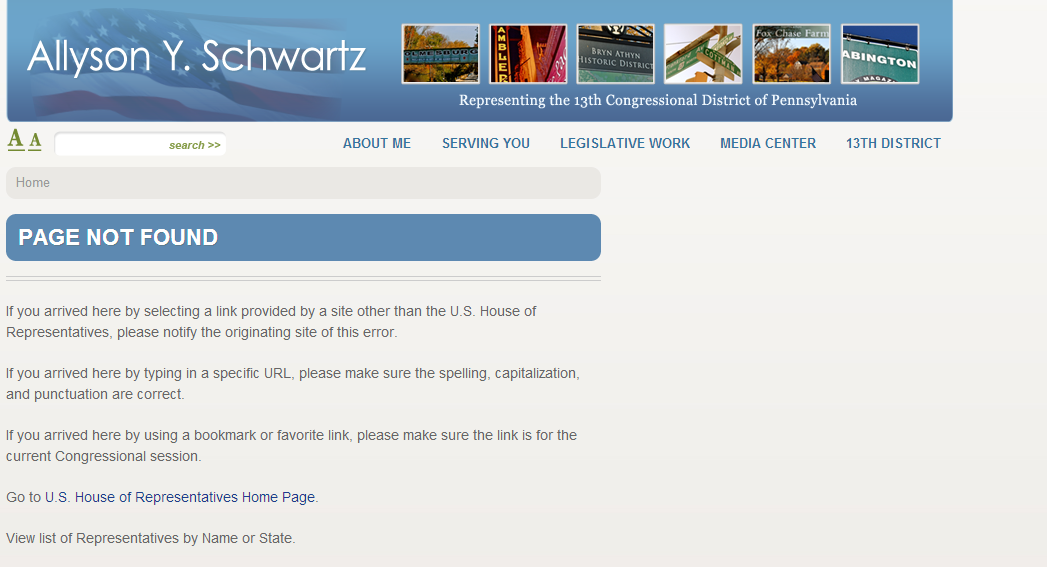 It’s clear Allyson Schwartz knows she broke her promise, and is now frantically working to hide her record from Pennsylvania families she supposedly served.

Yesterday, the White House admitted that some Americans will not be able to keep their health care plan under ObamaCare.

It’s just another broken promise from President Obama and Allyson Schwartz. Someone should tell Rep. Schwartz to update her Congressional website:
http://schwartz.house.gov/issue/affordable-care-act-update 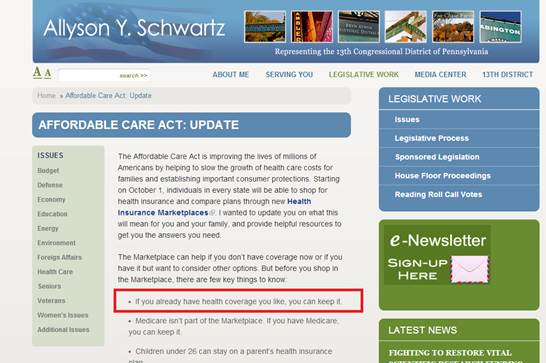 President Obama repeatedly assured Americans that after the Affordable Care Act became law, people who liked their health insurance would be able to keep it. But millions of Americans are getting or are about to get cancellation letters for their health insurance under Obamacare, say experts, and the Obama administration has known that for at least three years.

This story has been republished here

Four sources deeply involved in the Affordable Care Act tell NBC NEWS that 50 to 75 percent of the 14 million consumers who buy their insurance individually can expect to receive a “cancellation” letter or the equivalent over the next year because their existing policies don’t meet the standards mandated by the new health care law. One expert predicts that number could reach as high as 80 percent. And all say that many of those forced to buy pricier new policies will experience “sticker shock.”

None of this should come as a shock to the Obama administration. The law states that policies in effect as of March 23, 2010 will be “grandfathered,” meaning consumers can keep those policies even though they don’t meet requirements of the new health care law. But the Department of Health and Human Services then wrote regulations that narrowed that provision, by saying that if any part of a policy was significantly changed since that date — the deductible, co-pay, or benefits, for example — the policy would not be grandfathered.

Buried in Obamacare regulations from July 2010 is an estimate that because of normal turnover in the individual insurance market, “40 to 67 percent” of customers will not be able to keep their policy. And because many policies will have been changed since the key date, “the percentage of individual market policies losing grandfather status in a given year exceeds the 40 to 67 percent range.”

That means the administration knew that more than 40 to 67 percent of those in the individual market would not be able to keep their plans, even if they liked them.

“This says that when they made the promise, they knew half the people in this market outright couldn’t keep what they had and then they wrote the rules so that others couldn’t make it either,” said Robert Laszewski, of Health Policy and Strategy Associates, a consultant who works for health industry firms. Laszewski estimates that 80 percent of those in the individual market will not be able to keep their current policies and will have to buy insurance that meets requirements of the new law, which generally requires a richer package of benefits than most policies today.

The White House does not dispute that many in the individual market will lose their current coverage, but argues they will be offered better coverage in its place, and that many will get tax subsidies that would offset any increased costs.

“One of the main goals of the law is to ensure that people have insurance they can rely on — that doesn’t discriminate or charge more based on pre-existing conditions. The consumers who are getting notices are in plans that do not provide all these protections — but in the vast majority of cases, those same insurers will automatically shift their enrollees to a plan that provides new consumer protections and, for nearly half of individual market enrollees, discounts through premium tax credits,” said White House spokesperson Jessica Santillo.

“Nothing in the Affordable Care Act forces people out of their health plans: The law allows plans that covered people at the time the law was enacted to continue to offer that same coverage to the same enrollees — nothing has changed and that coverage can continue into 2014,” she said.

Today, White House spokesman Jay Carney was asked about the president’s promise that consumers would be able to keep their health care. “What the president said and what everybody said all along is that there are going to be changes brought about by the Affordable Care Act to create minimum standards of coverage, minimum services that every insurance plan has to provide,” Carney said. “So it’s true that there are existing healthcare plans on the individual market that don’t meet those minimum standards and therefore do not qualify for the Affordable Care Act.”

Heather Goldwater, 38, of South Carolina, says that she received a letter from her insurer saying the company would no longer offer her plan, but hasn’t yet received a follow-up letter with a comparable option.

Other experts said that most consumers in the individual market will not be able to keep their policies. Nancy Thompson, senior vice president of CBIZ Benefits, which helps companies manage their employee benefits, says numbers in this market are hard to pin down, but that data from states and carriers suggests “anywhere from 50 to 75 percent” of individual policy holders will get cancellation letters. Kansas Insurance Commissioner Sandy Praeger, who chairs the health committee of the National Association of Insurance Commissioners, says that estimate is “probably about right.” She added that a few states are asking insurance companies to cancel and replace policies, rather than just amend them, to avoid confusion.

A spokesman for America’s Health Plans says there are no precise numbers on how many will receive cancellations letters or get notices that their current policies don’t meet ACA standards. In both cases, consumers will not be able to keep their current coverage.

Those getting the cancellation letters are often shocked and unhappy.

George Schwab, 62, of North Carolina, said he was “perfectly happy” with his plan from Blue Cross Blue Shield, which also insured his wife for a $228 monthly premium. But this past September, he was surprised to receive a letter saying his policy was no longer available. The “comparable” plan the insurance company offered him carried a $1,208 monthly premium and a $5,500 deductible.

And the best option he’s found on the exchange so far offered a 415 percent jump in premium, to $948 a month.

“The deductible is less,” he said, “But the plan doesn’t meet my needs. Its unaffordable.”

“I’m sitting here looking at this, thinking we ought to just pay the fine and just get insurance when we’re sick,” Schwab added. “Everybody’s worried about whether the website works or not, but that’s fixable. That’s just the tip of the iceberg. This stuff isn’t fixable.”

Heather Goldwater, 38, of South Carolina, is raising a new baby while running her own PR firm. She said she received a letter last July from Cigna, her insurance company, that said the company would no longer offer her individual plan, and promised to send a letter by October offering a comparable option. So far, she hasn’t received anything.

“I’m completely overwhelmed with a six-month-old and a business,” said Goldwater. “The last thing I can do is spend hours poring over a website that isn’t working, trying to wrap my head around this entire health care overhaul.”

Goldwater said she supports the new law and is grateful for provisions helping folks like her with pre-existing conditions, but she worries she won’t be able to afford the new insurance, which is expected to cost more because it has more benefits. “I’m jealous of people who have really good health insurance,” she said. “It’s people like me who are stuck in the middle who are going to get screwed.”

Richard Helgren, a Lansing, Mich., retiree, said he was “irate” when he received a letter informing him that his wife Amy’s $559 a month health plan was being changed because of the law. The plan the insurer offered raised his deductible from $0 to $2,500, and the company gave him 17 days to decide.

The higher costs spooked him and his wife, who have painstakingly planned for their retirement years. “Every dollar we didn’t plan for erodes our standard of living,” Helgren said.

Ulltimately, though Helgren opted not to shop through the ACA exchanges, he was able to apply for a good plan with a slightly lower premium through an insurance agent.
He said he never believed President Obama’s promise that people would be able to keep their current plans.

“I heard him only about a thousand times,” he said. “I didn’t believe him when he said it though because there was just no way that was going to happen. They wrote the regulations so strictly that none of the old polices can grandfather.”

For months, Laszewski has warned that some consumers will face sticker shock. He recently got his own notice that he and his wife cannot keep their current policy, which he described as one of the best, so-called “Cadillac” plans offered for 2013. Now, he said, the best comparable plan he found for 2014 has a smaller doctor network, larger out-of-pocket costs, and a 66 percent premium increase.

“Mr. President, I like the coverage I have,” Laszweski said. “It is the best health insurance policy you can buy.”

Join us for our 2020 Lincoln Day Dinner with Captain Sean Parnell on January 24th!RSVP