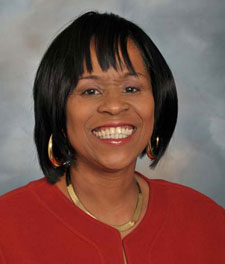 Renee is a long time advocate of clinically appropriate and cost effective alternatives to more expensive care. Trained as a Registered Nurse, with a Masters degree in Counseling and Administration, Ms. Amoore has earned an enviable reputation for innovative treatment approaches for persons with mental illness, addictive disorders, mental retardation and others.

In 1992, she was elected to and currently serves as a member of the Republican Party of Pennsylvania. In 1996, she was elevated to the position of Deputy Chair of this group and is increasingly recognized nationally for the work she is doing to bring more people of color into the Republican Party. In 1996, she was appointed to serve as an alternate delegate to the Pennsylvania Delegation at the Republican National Convention in San Diego. Currently she chairs the Pennsylvania New Majority Council. In 1999 she was named Montgomery County Republican of the Year and was placed on the Movers and Shakers List by the NAUW. Also in 1999 she was awarded the Eveyln McPhail award for political activism by the Republican National Committee.

Her activities are expanding to international levels as she coordinates progressive programs in South Africa in conjunction with its newly formed government. Ms. Amoore also serves as Chairman of Gov. Tom Ridge’s Advisory Committee on African American Affairs, and in 1998 was named as a member of the newly formed Human Resources Investment Council.

Ms. Amoore’s interest in the community is an extension of her commitment to service. Toward that end, in 1991 she was elected as an at-large member of the Board of Directors of the Upper Merion School District — the first African-American ever elected to the office — and she served as Board Vice President for four years. An energetic leader, she has been active in many professional and community organizations. They include the NAACP, the American Legion Auxiliary, Negro Business and Professional Women, Martin Luther King, Jr. Association, both Philadelphia and King of Prussia Chambers of Commerce, National Association of Women Business Owners, African American Museum Board of Directors, Drexel University Board of Trustees and Elkins Park Hospital Board of Trustees. She hosts a community service oriented talk radio show on WHAT-FM.

Ms. Amoore has received many awards, including Pennsylvania’s Best 50 Women in Business, National Registry of Who’s Who, Black Achievers Award, Pennsylvania’s Honor Roll for Women, NAACP Award for Community Service in Education and the “Class of ’98” from Main Line Today magazine. Ms. Amoore was honored by Elizabeth Dole as an Outstanding Entrepreneur for her achievements in the business community.