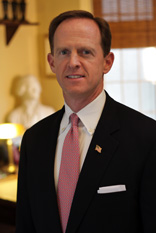 Since his earliest days of public service, Pat Toomey has been a champion for job creation, economic growth, and more prosperity for all Pennsylvanians. He’s been a principled leader fighting for fiscal responsibility as well as for ending the overspending, higher taxes, and excessive red tape coming out of Washington.

Pat also works hard to get things done for Pennsylvania, including working across the aisle on important bipartisan legislation. For instance, he was a leading author of the JOBS Act, which was signed into law by President Obama in 2012 and is helping small- and medium-sized businesses grow and hire more workers. Pat has also worked on bipartisan legislation that will keep our children safe at school, eliminate wasteful subsidies and corporate welfare, and lower energy prices for Pennsylvanians.

Pat was elected to the U.S. House of Representatives in 1998 and stuck to his commitment to serve only three terms. He also was the president of the Club for Growth, operated a small restaurant business in the Lehigh Valley, and worked in the financial services industry.

Pat and Kris Toomey live in Zionsville along with their three children, Bridget, Patrick, and Duncan.